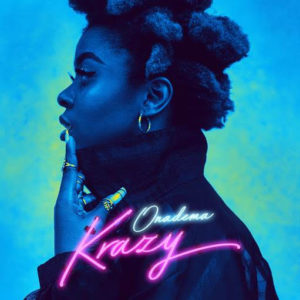 “The timely release of Ona Dema’s new single “Krazy” is one that bears prominent significance. It has been exactly one year since Ona Dema debuted under Sony Music with her Dremo-assisted single ‘No Time,’ a song whose reception was gradual and consistent, earning her good placement across playlist platforms as well as generous spins on radio.

While the track gained acceptance, Ona embarked on an extensive boot camp series with some profiled personnel in music. From songwriting to vocal development and experimenting different sounds with a variety of producers, Ona described the process as “pretty tasking but also very exciting.” Now that she is fresh out of that experience, her energy is being channeled into the introduction of her highly-anticipated new single.

“Krazy” is produced by Marvey Muzique. The track blends in Afro sound improvisations with the R&B genre, and carries the signature of Ona Dema’s lush canary-like vocals as she recounts some dating and relationship experiences. “I’ve seen situations where a guy takes advantage of a girl because she cares too much. So in a way, I was speaking for many of us who are tired of being taken for granted” Ona explains.

Fans will also find this single relatable, especially with the popular Naija lingo used to fiercely caution heartbreakers and playboys when Ona Dema says “you go see my crase!”.