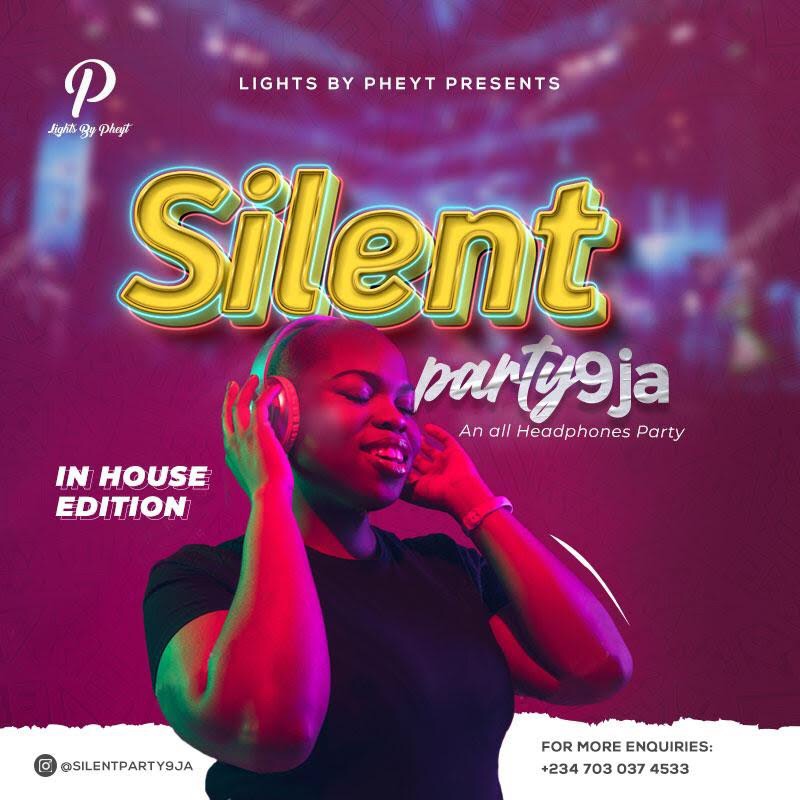 SilentParty9ja is a headphone brand that was officially launched on Friday, 31st July 2020 under the Lights By Pheyt company.

What is a Silent Party?

A Silent Party or Silent Rave is a dynamic structure of party or event where people dance to music listened to on wireless headphones. Technically music is broadcast via a radio transmitter with the signal being picked up by wireless headphone receivers worn by the participants, rather than using a speaker system. Those without the headphones hear no music, resulting in a noiseless environment.

In the earliest days of silent discos, before 2005, there would be only one channel available to listen to music through. Over time, the technology moved along to where there were two.

Now, the technology allows three channels where three separate DJs and Hypemen could broadcast over at the same time, and guests can vibe to tunes and switch between these 3 Channels with their headphones individually. These channels are indicated by colours Red, Blue, and Green.

Why is it better than the normal club?

Silent Party is more social, keeps the diverse crowd happy,  and it is an interactive experience where DJs tailor the party to what the crowd wants to hear. With Silent Party, 3 Live DJs will be battling for the attention of the party-goers who have the ability to switch between three genres of music. This technology can create a party anywhere, from night club to city street, cruise ship to subway train.

SilentParty9ja promises not to limit this to parties alone but extends also to Silent Cinemas, Silent Yoga, Silent Hiking, S.W.A.P (Silent Wedding After Party) and so much more.

The Brand is open to partnerships and rentals.

For more information, reach out to them on: