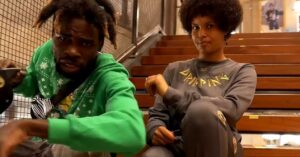 The UK singer-songwriter and rapper; Zonjjy has made it again with his wavy hit song and music video titled “Trust Me“, this visuals has gained over 200K+ views on its first week of release.

“The music video was first featured on America’s biggest hip-hop music websites ‘Allhiphop’ and ‘WorldstarHiphop’ to name a few. He is rap-singing on a trap RnB soul beat, in which he talked about money & fame and how he is now in control of his future after he faced a lot of trouble with the law and haters. The lyrics and the video speak for themselves. You are going to like this song whether you are in the United Kingdom, America or Worldwide. This track hits you differently”.

Zonjjy’s british accent and the way he sings and raps are what made the song stands out, even more than American rappers, I think. Enough said about it.